Although I am from the North East, I spent most of my career in business in the South East. I am married, with two remaining grown up children; Matthew who is married with two young children and lives in San Francisco, and Sophie who is a dancer/performer and lives in London.

My other son James died after an epileptic seizure when he was 21. Until that morning I had accepted that his epilepsy was inconvenient, but never thought it was seriously life threatening. James had his first seizure when on holiday in France at 15. He had night time seizures only, so he was able to drive and his life was largely normal. James had just graduated from Keele University with a good degree when he died. He was intending to spend a year out (snowboarding!). He was a great son, a party waiting to happen who loved music and dancing.

Following his death, mixed with the wave of sadness, I was massively angry that we didn't know this could happen, and frustrated that I could perhaps have done something about it. I searched to understand, ran marathons to raise money (and burn off some of the emotion), and worked with a number of epilepsy charities to try to help prevent such loss in the future.

I first got involved with SUDEP Action when I was still chair of 'the fund for epilepsy’ and met Jane Hanna to talk about a possible merger. I was later invited by Jane to join the trustees. SUDEP Action found a special place with me because its mission matches exactly with mine. 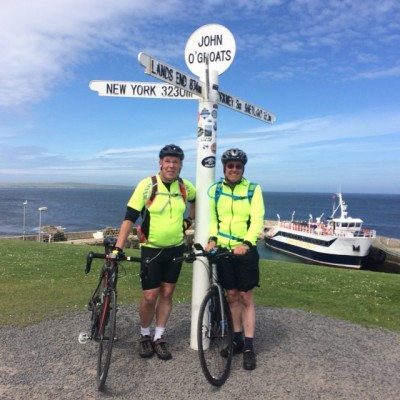 Last summer, a close friend, Roger, with whose family we had all been skiing for years, had planned to do a Land's End to John o' Groats (LEJOG). He was going to do it with another of his friends who had been diagnosed with cancer, and couldn't make it - he died the day we set off bizarrely. I stepped in to keep Roger company and decided to raise money for SUDEP Action.

LEJOG was great. We had some mixed weather but on the whole it was a fantastic experience. We covered 987 miles in 15 and a half days, tackling ascents equal to 1.5 Everests! I lost a bit of weight, muscled up and improved my UK geography.
I also confess to a bit of smugness.

To be honest, it seems like more and more fun the further it recedes into history. There were some tough parts but it was mostly great fun. Highlights included finishing, crossing the big bridges over the Avon and Tweed and Forth that marked big stages, crossing into Scotland, and no surprise, getting to the top of the Grampians. Lowlights include getting completely drenched and battling into 20mph winds that were so strong I had to pedal to go downhill!!!! We did laugh a lot. It was hard work from time to time, I felt emotional, proud and relieved when we finally arrived at John O’Groats.

I should thank Roger for getting me into it, and his wife Ingrid who drove the support van. The family and friends we stayed with on some nights and the very, very generous people who helped raise the £11,500 much needed funds.