Home › A story of Grief by Diane Player

A story of Grief by Diane Player 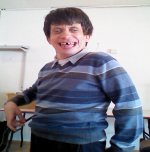 Grief is a deep dark abyss of despair; it encompasses your mind and your thoughts.  It’s the inability of trying to make sense of what has happened to the one you love so much. The sudden shock of them no longer being there is insurmountable; the hurt from the pain is never-ending. You keep hoping it’s a nightmare and that you will wake up and find everything is back to normal; which of course it never will be.

I have flashbacks of that morning of having to make phone calls to tell people the dreadful news.  I found it very difficult using the dreaded D-word then and I still do. It’s as if by not saying the D word it isn’t final and they haven’t left you, therefore it can’t be true.

The adjustment you have to make to your life is never-ending.  It’s so overwhelming when your thoughts are devastated by your loss. Lying in bed in the morning when you know you have to face the day but without the enthusiasm to do so. Just going through the motions of normality is so difficult. Time drags so the days seem longer than ever, crying incessantly is so exhausting, as you try so hard to gain control of your emotions but failing dismally.

I found it so difficult the first time I went to the supermarket after Richard’s death. I just wanted to shout at the people, who were laughing and talking, how dare they as my darling son had just died and how insensitive of them to behave like that. I wanted people to realise this but of course, I didn’t as they wouldn’t have understood.

I can now laugh and chat with people whilst feeling lost and sad inside. I am very good at silently crying whilst reading a book or watching the television.

I have to disagree with those people who say in time the sadness will heal; it doesn’t. A crucial part of your heart died that day, along with the one you loved. There isn’t anything you can do to revive it. One learns to cope and become adept at hiding one's true feelings, behind a smile.

By Diane Player (Diane's son Richard is pictured above)

If you would like to speak to someone, please contact the support team on 01235 772852 or email: [email protected]