We are a big family, and I am the oldest of 7 children. My sister Katie who died on 9 January, 2017, was the fourth child, and was also a twin. Lucie, her younger twin also has epilepsy. We all spend a lot of time together for everything, from Sunday lunches to summer holidays. The five sisters would often have 'sister nights' in or out where we would all get together for drinks, gossip and a good laugh.

Katie lived across the road from me and my two young sons. She loved her independence and never let epilepsy stop her from doing anything. As well as tonic colonic seizures, Katie also had twitches and when they occurred, it would cause the family to do a Mexican Wave. I guess it was a way of making light of the situation, and it always made Katie laugh and tell us we were all crazy! As a show of sibling solidarity, we all wore specially made bright coloured hoodies as Katie loved colours and hoodies, both for her funeral and on the awareness day. 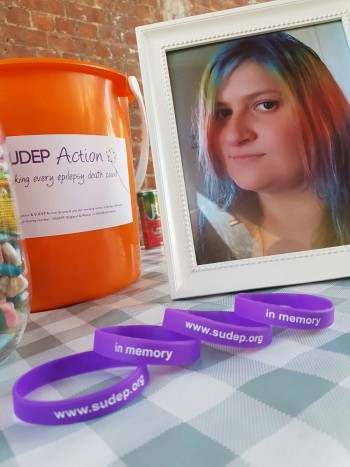 As a family, we were always aware of SUDEP and I think it was something we were always fearful of. So when Katie died and we realised a lot of people weren't aware that someone with epilepsy could die unexpectedly, it seemed like a good idea to raise awareness and contribute some funds to the charity.

We organised an awareness event with the band STAN as the lead singer of STAN is my stepdad. STAN do gigs all over the north east and Katie would often go with my Mum so the regular fans knew her. She had rainbow dyed hair so she certainly stood out from the crowd!

The STAN awareness event was free. We raised money from donations via our Just Giving page which we opened a month before the event and collected donations on the day. We also sold tombola tickets, with prizes donated by family and friends. The prizes included: an overnight stay in a hotel; free haircuts; a meal at a local restaurant; a children’s face painting party; manicures; afternoon tea; champagne and so much more! The event went very well. There was a fantastic turnout and so much support from everyone there.

For the family it was bittersweet, but we all felt a sense of achievement and that Katie would be proud, although we knew she would have hated all the fuss about her. The hardest part for me was going on the stage and explaining about Katie, SUDEP and the charity, but we wanted people to know why we were doing it.

As a family we just want other families not to have to go through the heartache that we are going through. We were aware of SUDEP but obviously it is still so unexpected and shocking when you lose a loved one. We really wanted to fundraise for research into SUDEP. Obviously with Lucie having epilepsy, it is still so close to our family and a way of preventing SUDEP in the future would be great. Also, from a genetics point of view and how it could affect our family in the future.

We were all so proud and thankful to all our wider family, friends and the supporters we met on the day. To raise a total of £2, 905 in memory of Katie means so much to us all.