30th Nov 2012
He had only ever canoed on holiday, yet Martin Lodemore managed to paddle 184 miles of the River Thames to raise £4,400 for Epilepsy Bereaved.

Inspired by the loss of his nephew Tom Lodemore to epilepsy, the 52-year-old took 14 days to complete his epic journey from the river’s source in Gloucestershire to the Thames Barrier, east of London.

The adventure saw him paddling for about six hours a day, under 108 bridges and through 45 working locks, mostly in the rain and narrowly missing a tornado that passed through Oxford.  “I grew muscles in my arms I didn’t realise I had,” said Martin, who decided to take on the challenge after Tom’s friend climbed Kilimanjaro for the charity.

“We were all looking for something else to do,” explained the patient and public liaison officer for diabetes research, from Gants Hill, Essex. “I’d always felt comfortable on 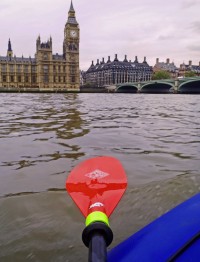 water and had done a little bit of canoeing on holiday. I thought about rowing, but I didn’t fancy going backwards for 180 miles, so I decided to canoe the Thames.”
After 18 months training in an inflatable canoe on the Thames, the Medway and a 13-mile stretch of the Chelner and Blackwater navigational canal, Martin began his incredible journey on May 5.

“Because there had been so much rain, the river was very fast and very powerful,” said Martin. “The first couple of days were all about learning how to deal with the river, which was very twisty. Going round corners was like being in a car and skidding, but being pushed towards the bank at the same time. The lock keepers kept saying ‘don’t go out’.

“On the straight I was pushed along faster, which helped, but the closer I got to central London, the water was far rougher.  There were times when I was soaking wet that I thought: ‘Why am I here?’” he said. “But then I remembered some of the stories I’d been told by people who’d lost family and friends to epilepsy and SUDEP and it reminded me why I was doing it. I also received a lot of text messages and jokes which kept me going along the way.”

Serving police officer Tom Lodemore was 27 when he died in January 2007.  “It was a huge shock to the family because he was a larger than life character in the nicest possible way,” said Martin.  “He’d just been on a double shift and had arrived home pretty tired. He had breakfast with his partner before she went to work and Tom went to bed. When she got home, she found him. We had no idea what had happened.

“He’d had a few seizures in the six years before his death, but he was fit enough to join the police. We knew nothing about SUDEP, but EB supported the family when we lost Tom, and the staff were brilliant. Tom’s parents, Steve and Kath, found it helpful to meet other people in a similar situation, to share stories and to know they were not alone.”

Martin, who kept a blog throughout his trip, added: “Family was very important to Tom and his death is a great loss to us. He was always smiling, always there to offer support and help – the reason he joined the police force was because he wanted to contribute to society.  “Now we are hoping the money we’ve raised will help support other families, fund research and raise awareness.”