Home › My sister, my inspiration

My sister, my inspiration

Euston station, early noughties. I am excited to see her. I wait patiently on the concourse, excited that my little sister is coming to visit. The red streaks in her hair, (always experimenting with out of the box colours, I always wanted her natural blonde hair) and a fur lined coat she always used to wear.

I loved her visits, we had so many adventures visiting each other’s unis and got closer and closer as we grew up – we were best friends. We would go everywhere in London, Saatchi gallery, trying sushi for the first time and showing her my favourite pubs.

She had a dry and hilarious sense of humour, yet was sensitive at the same time. She generally found mum and dad and often me too, quite embarrassing when she was around her friends. She was sweet, and quiet. She had a small but loyal circle of friends and was such a homebird. I think uni life really changed her for the better;, she came out of her shell, had a great network and started going out more. It used to tickle me reading her emails full of tales of uni antics.

Her room was her oasis, with her movie posters across every wall. I remember how obsessed she was with Titanic and Leanordo Dicaprio – and then studied film at uni. She had a much higher brow taste than me, her taste spanning the decades.

She hated her name being shortened, but then would refer to herself as ‘the Evester’ when she used to email me when I was backpacking. We would joke about boys, how she was TERRIBLE at emailing me and her life in Stoke.

I recall Eve’s first seizure;, we thought it was the fall off her bike that had caused  it, not that she’d developed epilepsy and tonic clonic seizures. She was diagnosed when she was 13. 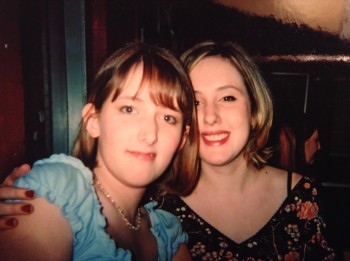 I recall as the years went on and the seizures became more frequent she tried her best not to let epilepsy eaffect her lifestyle. Her months included consultant appointments, remembering to take medication and recovering from seizures. It must have been so hard for her to not let it take over her life. I used to be terrified to hear that noise coming from her room, but she was strong in such a quiet, unassuming way. She epitomised the ‘no nonsense’ approach and preferred to just get on with life. I recall her asking me one day ‘why do I have epilepsy, it’s not fair’ after a nasty fall one time. It crushed me as it was the only time I saw a glimmer of what she must ’have been going through. Her friends at uni were really good at helping her too, I know she relied on them and they looked after her like a sister, for which I’ll be forever grateful.

In 2005 I was in Australia backpacking when I received an email asking me to call home. I stood in a bus station on a pay phone and recall hearing the unimagninable words from Dad, telling me that Eve had died.  What horrific news for him to have to deliver, he was so strong – and I went into shock. From that moment until I arrived back in the UK I was on auto pilot, just needing to get back to Mum and Dad.

As a sibling I didn’t know about SUDEP. Neither did Eve or my family. In the mid 2000’s there just wasn’t the information available about SUDEP. People tend to accidentally stumble across information online instead of from a medical professional (which must be quite a worrying way to find out too). It’s so important for doctors to discuss the risk with patients, as SUDEP is an increased risk for certain types of epilepsy, not all, and many people with epilepsy go onto to live long lives.

After losing Eve to SUDEP more than a decade ago, awareness and education is better, but there’s still so much to do.