13th Jul 2018
A place to thank, appreciate and celebrate our fundraisers.

Thank you so much to all our May 2018 fundraisers, who have been busy raising much needed funds. This is what some of them got up to.

Michelle Charlton took on a skydive challenge. She informed us: “I decided to do a skydive to raise money and hopefully awareness for SUDEP Action in memory of my sister, Lisa. The idea of my angel sister flying alongside me was my motivation and, I can imagine her saying she doesn’t believe I will jump out of plane. So, I had to prove her wrong. It was the most amazing thing I have ever done, it took me out of my comfort zone but it is a memory I will keep forever”.

Laura Marsden completed one of her #Prevent21 challenges. She commented: “As one of the 21 challenges I'm doing for the Prevent21 campaign, I wanted to do something I wouldn't have been able to do when my epilepsy was unsettled. I decided to walk over the O2, not only because I'm scared of heights but thought it was something a bit different! My other half Chris joined me for some moral support which took an hour and a half and offered some amazing views over Canary Wharf. I would recommend to others thinking about fundraising!”

Nicola Chalk ran The Lexicon Bracknell Half Marathon. She informed us: “In May 2017 my friend Nick and I watched the half marathon runners making a pact to run together the following year. Unfortunately it wasn’t to be, as Nick died less than two weeks later. It was so important for me to run the half marathon this year to raise much needed funds and awareness for SUDEP Action, in Nick’s memory. No family should have to go through what they all did and still do. I am so pleased that the amount I raised may go a small way to help.” 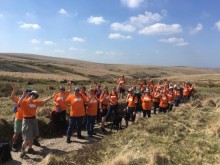 Sophie Pierce organised a fabulous fundraiser. She detailed: “I came up with the idea of ‘Darty Dozen’ after wanting to put on a challenging and fun event that people would remember.  The idea was to do twelve wild swims on spectacular Dartmoor over a weekend, camping overnight on the Saturday.   It all went amazingly, there was a heatwave, and we swam in rivers, lakes and waterfalls…and walked around 15 miles. We raised lots of money, but the event became about more than that – people talked about Felix and I felt very supported.”

If you have been inspired by what you have read and want to fundraiser for SUDEP Action please get in touch, we can help with advice, materials and inspiration.