8th Apr 2016
A place to thank, appreciate and celebrate our fundraisers.

Magnificent fundraising efforts were made in March by the SUDEP Action fundraisers. 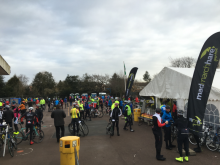 A brilliant cycling event, named the Mad March Hare Sportive, raised funds for SUDEP Action in memory of Gaye Tranter. As well as a collection, a percentage of every rider’s admission fee was donated to SUDEP Action. Event organiser, Dan Fox, commented:  “It went very well, lots of positive feedback.”

Bradley Rothwell achieved a tremendous accomplishment by running 10K in memory Grant Rothwell. Bradley informed us: “This time ten months ago I was 18 stone and couldn't even walk a mile, after a health scare I gave up drinking and am now 12 stone and today I have just run 10k in 49 minutes, 12 seconds for SUDEP Action in memory of my brother Grant.”

Joanna Byers and a group of friends got together to raise funds in memory of their friend Emily Rastall. Joanna informed us: “We were all in a choir together at university in Birmingham. A year after she died, we organised a concert in her memory, and this weekend, a smaller group of us busked in Birmingham City Centre as a barbershop choir, with an eclectic mix of music, to raise awareness and money for the work that you do.” 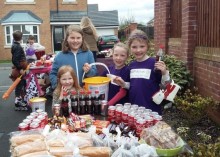 8 year old Alice McGoff and her friend Ava Keighley (also aged 8) held a table-top sale in memory of Alice’s big sister Sam Ahearn. Alice informed us: “It was real fun doing the sale for my big sister Sam who lives in heaven. I want to help get money to stop people dying because of epilepsy. I sold lots of my toys and books and cakes.”

Rowan Rose Young made the most of a Djembe workshop to raise funds in memory of her brother Jamal Gregory Young-Board. Rowan commented: ‘’For Purple Day this year I was at a Djembe workshop for the weekend. I asked everyone attending if they would wear purple to support me and raise a bit of cash. Summer 2013, I lost my big brother Jamal to SUDEP. Almost 3 years later, I am dealing with the diagnosis of Epilepsy myself. I will be doing a lot more in the future to help raise awareness of SUDEP.’’ The image pictured (left) was taken by Rowan over the Purple Day weekend.

Friends Sophie Ferguson and Celina Hernandez-Coulson took part in the Liverpool Half Marathon in memory of Connor Ryles. Celina informed us: “Sophie and I decided to do the half marathon and wanted to choose a charity with meaning. I lost my friend Connor to this terrible condition in October 2014 so there was no other charity more meaning full for me. It feels amazing to have been able to help such a good cause.” 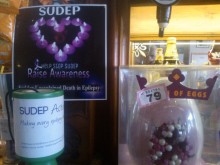 Peter Chamberlayne organised a workplace fundraising event in memory of his daughter Natalie. Peter commented: “When my daughter Natalie died last September, the worst thing was feeling so alone. Then recently I came across SUDEP Action and other awareness sites, and realised I was not alone. Others had been through the same trauma and sadly others will in the future. So, this Easter, I organised a fundraising weekend at the Malt Shovel Pub in Hull where I work. A raffle, donations and change box, all helped to raise money for such a worthy charity.”

Ruth Gregory ran the Bath Half Marathon in memory of Emily Sumaria. Ruth informed us: "In March I ran the Bath Half marathon to raise money for SUDEP Action. I wanted to run in memory of Emily who was my sister’s best childhood friend and sadly past away in 2012 at the age of 19. I think that what SUDEP does is really inspiring and excellent for raising awareness of epilepsy. Overall the experience was very rewarding and I hope to do another one in the near future."

Charlotte Hannah and her fiancé Michael kindly chose donations for SUDEP Action as their engagement party gifts. Charlotte commented:  "For our engagement party we thought rather than asking for presents we would use this opportunity to raise some money for SUDEP Action, a charity that is very close to our hearts. In 2002, my sister sadly passed away suddenly and ever since myself and my family has been raising money for SUDEP Action. Everyone was extremely generous at giving to the charity, and we were overwhelmed with the response and generosity of all of our friends and family.”

Well done and thank you to all of our March fundraisers. We truly appreciate your help and support.

If you took part in a fundraising event in March and you would like to be included in this blog please email [email protected].