My name is Lizzie Johnson, I am 61 and live in Carmarthenshire with my husband where I have two holiday cottages which I own and look after. My sister and I walked 100km of the pilgrimage route to Santiago de Compostela in Spain, in memory of my youngest son Greg, who died in 2012.

Greg was 24 when he died and was a care worker, working with the elderly – a job which he loved. He was funny, kind and infuriating in equal measure and we loved him enormously. On the day he died he had just started an access course which he hoped would enable him to become a nurse as his epilepsy had blighted his formal education.

I found SUDEP Action when exploring counselling services when I was at my lowest ebb about 18 months after Greg died, and was so grateful to have someone to talk to.

I have always been a keen walker but have never done any long distances, and becoming a pilgrim has been something I have wanted to do for many years so I decided to combine some fundraising with the milestone of reaching 60!

My sister Fran joined me and we walked for 5 days, firstly in the beautiful Galician countryside and then along the busier French way to Santiago de Compostela. It was one of the best weeks of my life, rising early (not something I’m known for!), following the way markers, chatting to other pilgrims from all over the world and, of course, stopping for a well-earned beer whenever we could!! 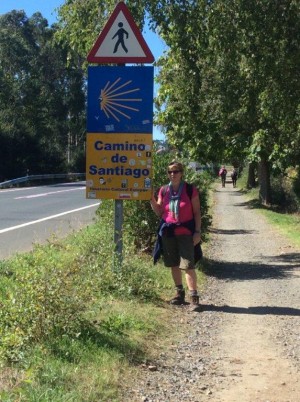 The walking was quite hard in places but so interesting; we saw so many places that one would never reach normally in a car. Remarkably, we avoided blisters and mosquitoes and were rewarded after five days by the sight of one of the most beautiful cities I have ever seen.

The Spanish have a saying – “The Camino (meaning the way) is the goal” -so reaching Santiago is rather odd because the walk is your reason for going, not the destination and you just wander around the most stunning little city trying to take in the fact that you have arrived and that you don’t have to walk anymore, which is rather sad. My husband, Dudley, was there to meet us, which was lovely and we went to collect our certificates (a long queue) the following day. At Mass that day our names were read out (English pilgrims from Lugo) along with all the pilgrims and there starting points. The cathedral is wonderful.

It was one of the best weeks of my life and I am definitely going back to walk some more next year!! I think I was probably born to be a pilgrim! I loved every minute, and hope Greg would be proud of us. Taking one step at a time, metaphorically and physically, has been the only way I have been able to cope with Greg’s death. Going on pilgrimage was an extension of this strategy.

I can’t thank my sister Fran enough. Apart from the fact that she is a far better map reader than me, she was great company and we laughed so much. A huge thank you also to all those who sponsored me and to my dear husband for all his support.