14th Aug 2018
A place to thank, appreciate and celebrate our fundraisers.

July was a busy month with lots of SUDEP Action fundraising. 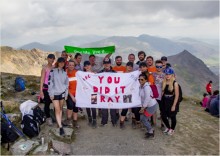 Samantha Yeates and family climbed Snowdon in momory of Ray White. Samantha informed us: “My mum lost her older brother, Ray in April this year which was when SUDEP was brought to our attention. Ray had always wanted to climb Snowdon but unfortunately didn’t fulfil his dream. On Saturday 7th July, my family and I reached the summit of Snowdon in Ray’s memory and spread his ashes so there will always be a part of him there. We want to raise more awareness for such an amazing charity and to hopefully help others.” 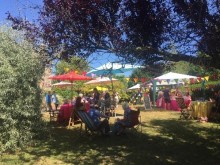 Amanda Hembrough opened her beautiful garden in memory of Felix Murdin. "I decided to open my garden in memory of my friend's son and to raise awareness of SUDEP. The sun shone and it was a joyous day with cream teas, a plant sale and book sale. The book sale was an important part of the day as my friend's son loved to read. Yes, we raised money for SUDEP Action but really the day was for my friend and her family so that they felt supported and loved by all those around them." 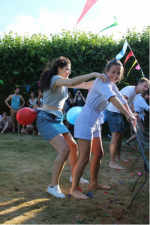 The Sumarias and James Hewitt organised the Tuk Tuk To Turkey Summer Fete in July in aid of their broader Tuk Tuk To Turkey trip in September, in memory of Emily Sumaria. Emily’s sister, Amy told us: “We were inspired by some pictures of Emily from her primary school’s sports day and wanted to hold an event that would bring out everyone’s “inner kid”.  We had some Love Island inspired relay races (see photo), woodlouse racing, a coconut shy, “guess the weight of the tuktuk” and one game, which everyone enjoyed too much, was throwing sponges at the TTTT Team’s faces! We raised a lot of money and had such a fun time in the sun doing it.” 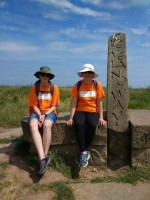 Rebecca Moody did a walk for SUDEP Action.
“My sister Joanna was 19 when she died from SUDEP while at York University in 2001. It was her third and final seizure. She was a beautiful, talented and spirited person, with many friends and her death shook us all. On 15th July, my friends and I walked part of the Cleveland Way, in Jo's memory, for SUDEP Action. We enjoyed the beautiful weather and stunning Yorkshire coastline. We'll walk the next leg in 2019, can't wait!”

Eggar's School in Alton, Hants has opened a Memorial Garden, dedicated to former pupil Becky Scrivens, who was lost to SUDEP in May 2004. Via Becky's parents, Roger and Sandie, the school distributed SUDEP Action leaflets to parents of 200+ Year 7 pupils who also took part in a sponsored fun run around the school grounds. A cheque was presented to Sandie and Roger by representatives of the Year 7 pupils.

This year’s annual 100-mile sponsored run at Binsted School, Alton was also held in memory of Becky Scrivens. Primary school children, parents, dogs and teachers ran/walked with the aim of each achieving a mile towards the 100-mile goal. The school also held a mufti day with a purple theme. The events were organised by headteacher, Sharron Morton and parent, Tamasine Franks, who was also one of Team Becky’s London 10k runners just three days earlier. 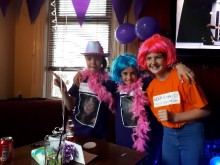 A family fun day followed by a race night was held in memory of Sam Ahearn. Lynn McGoff, Sam’s mum informed us: “We were so lucky on the day weather-wise, as there was a bouncy castle etc. for the children but we managed to dodge the rain until the kids had to leave at 7pm.  We’ve never been to a race night so wasn’t sure what to expect but it was so funny which made it more enjoyable. The couple who run the pub were absolutely amazing and did a lovely comment to all at the end about epilepsy and how they have been so touched by Sam’s story. It truly was an enjoyable day/night had by all that attended.  Lots of leaflets of information were left on tables and people were asking us about what had happened.” Pictured are Alice McGoff and her friends Olivia Booth and Emily Donaldson. 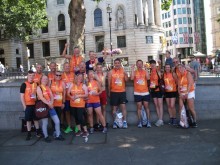 SUDEP Action’s Community Services and Fundraising Coordinator Katie Vale attended the British Westminster London 10K to cheer and meet a fab team of around 30 SUDEP Action supporters. Katie commented: “I am so proud of all our runners. They did so well to complete the event. The day was incredibly hot which made their accomplishment all the more amazing. It was great to cheer them on and meet up after the event. Well done everyone!” 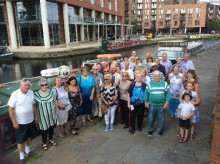 Sally Lawrence used her birthday to raise funds in memory of Samuel Lawrence. She informed us: “Due to advancing age, my fundraising capabilities are now somewhat restricted, but my recent big birthday canal boat party was the perfect occasion!  At my age I have most things I want or need - apart from my lovely son, lost to SUDEP seven years ago. Instead of birthday presents, I asked if my friends and family wished to donate to SUDEP Action and I was so touched by their response, lovely people.  I'm moved to tears whilst writing.  This is why I know and love them all.”

Thank you so much to everyone who raised much needed funds for SUDEP Action in July. It was great to hear about what you got up to.

If you have raised funds in July 18 and want to be included in this blog, then email [email protected].

If you have been inspired and would like to fundraise then call us on 01235 772850 or email [email protected], we would love to hear from you.