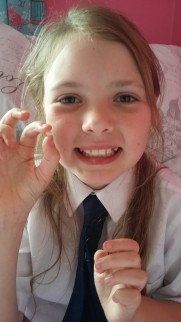 Hi my name is Lynn and our daughter Samantha died aged 19, just 6 months after her first seizure, due to SUDEP.  At the time our youngest daughter Alice was just 23 months old.  Some may say she was too young to remember Samantha, although we know she wasn’t. It was eight years, on July 16th, since Samantha’s death and it has a tendency to keeping throwing things at us.

The thing I wanted to share with everyone is the experience that grief has thrown at not just us, but Alice, who is now 9 years old.
We have always been open with Alice and shared our memories and birthdays of her sister.  We have lots of photographs and memorbilias including DVDs that we have managed to watch, all of which has been a God send for Alice.
For over two years, Alice has been so poorly every 4-6 weeks with abdominal pain, that when she has it she is unable to eat or drink (Alice normally loves her food!). She has been under a consultant to find out why this has been happening. As there was a pattern to the episodes, the consultant thought it could be hormonal, even at a young age, then went on to prescribe migrane tablets as he thought it was stomach migrane.
Each time with the pain and the non-eating, she was hospitalised in order to administrate morphine for the pain and be put on a drip to prevent dehydration. This was heart breaking watching her in so much pain that even morphine wasn’t touching.
April of last year was the final straw, after non-eating or drinking for 10 days solely living off a drip for fluids and morphine for pain. The hospital did every test under the sun, CT scans bloods MRI, you name it, Alice had the test.

One day after the results came back, we had a consultant by Alice’s bed to inform us that every test had came back normal. He went on to mention that he thought it could be something physcological.  We weren’t sure that we believed that, as we seen Alice in so much pain and it was tearing me apart watching her.  We tried coaxing her with MacDonald’s and sweets to which she’d say I can’t eat!  This particular afternoon after listening to the consultant and trying to take it all in, Alice’s tooth fell out. As you can imagine, she couldn’t wait for the tooth fairy to pay a visit that night.  Whilst she was asleep I had a plan to prove the Dr’s wrong. I wrote a letter from the tooth fairy and along with the coin I put a Haribo sweet in the envelope explaining that it was a magic sweet to make her better.

When she woke in the morning and opened the envelope she was upset that she’d been left a sweet when the tooth fairy should know she can’t eat.  I went on to say that the letter indicated that it was a magic sweet that would make her better. A bit reluctant, she put that one sweet in her mouth and shouted yay I’m better and demanded breakfast.  As you can imagine we were so relieved but also so sad, at this point Alice was making up for lost time and wanted food and drink without being prompted. (we finally got our bubbly 8-year-old daughter back). Along came a support worker who then took Alice into the play room whilst we had a chat with the consultant.
I have to say that we were gobsmacked as to how quick the pain went. This confirmed that it really was psychological.  At this point Alice was discharged from hospital and referred to a child psychologist.  Luckily the appointment came through with a wait of only two weeks.
The lady that we see was so lovely and it was someone that I’d seen a few years back, so knew she knew the story about Samantha.  One of the hardest things was telling Alice about seeing this lady, who Alice made her own mind up to relate to her as the 'worry doctor'.

On the morning of the appointment we took Alice and spent the first appointment together explaining to Alice what was going to happen at future appointments, as she would be on her own whilst we stayed outside. Alice clicked with Christine really quickly, as she wanted to call her by her name, no longer wanting to call her the 'worry doctor'.  I found it really hard that Alice was going into this room, and us not knowing what is being said. I had no reason to worry as when Alice came out she was really happy and talked to us a lot about the games that she played. She actually looked forward to going each week.

i went in with her for her last appointment. Christine was explaining to Alice, that like everything else, this now had to come to an end.  Alice was a bit upset but we manged to talk to her and explained that Christine now had to see other children that were waiting for an appointment, so she could help them, like she helped her.  I went back the next week on my own to discuss the final outcome and was told that Alice’s pain was so real but it was caused by the reality of grief, of never knowing or seeing her sister again.  A child’s grief is so different as they don’t know how to express themselves and the brain takes over which is so powerful.
Alice has been pain-free for over thirteen months now and is able to discuss when she’s feeling sad and we then work with her to enable this not to turn into a pain.
I really wanted to share this with people, as I wish I knew two years ago and could have prevented this pain and non-eating.

I cannot thank that doctor enough for realising this and also the counsellor.