28th Jun 2012
Drummer Boyd Hayward had no trouble getting his former band mates to reunite to raise awareness of SUDEP following his sister’s death. And the gigs that followed have been so successful, The Warm has raised over £1,450 for Epilepsy Bereaved.

Rebecca Hayward was just 28 when her friend found her unconscious in bed at the flat they shared in Ocean Village, Southampton, on June 23, this year. 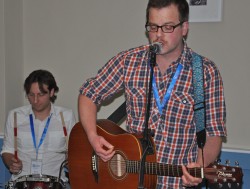 The keen music-lover, who had lived with epilepsy since the age of 12, had died suddenly, leaving her family devastated.

She was such a fan of The Warm and Boyd’s three band mates, that the trio, singer Nick Hart, bass player Richard Simmons and guitarist Stu Minchin, along with former manager Rudi Lovell, even carried his sister’s coffin at her funeral.  “I didn’t really need to ask, the band just wanted to do anything they could to help,” said Boyd, 33, who attributes Rebecca’s skill at playing the drums for inspiring him to take up the instrument.

“Given how much she loved the band and the whole drumming connection it felt like the right thing to do for her,” said Boyd, a professional drum teacher from Warsash, Hants.  “It was good for me to be back with my mates and I think we’ve all enjoyed the camaraderie of playing together, the friendship and meeting new people along the way.”

The Warm, which has supported successful UK acts such as Snow Patrol and Scouting for Girls, had been on a break since May 2010, when Boyd went travelling and two of the group had families.  But after reuniting in the summer, they have concentrated on fundraising gigs, including one at EB’s annual conference near Rugby, then two in Southampton, at The Ranch studios and The Talking Heads.

Boyd has also raised cash playing for his other band, The Dlugokecki, at its 10th anniversary Christmas event in Southampton.