19th Sep 2017
A place to thank, appreciate and celebrate our fundraisers.

This is what some of our amazing August fundraisers got up to. 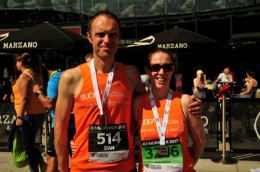 Debbie and Daniel Gilbert took part in the Norwich 10K in memory of Nick Flanagan. They informed us:  “After our good friend Nick died suddenly we both wanted to do something to raise funds for SUDEP. Nicks death was a huge shock to us and devastating to his family but SUDEP Action were able to help in the immediate aftermath. We decided to run the Run Norwich 10Km in his memory and for SUDEP Action. The run was really well supported and we were both very pleased with our finishing times. Running for SUDEP Action also allowed us to increase the awareness of the great work that SUDEP Action do."

Julie Coutts and a tough team of ladies took part in a muddy obstacle course in memory of Marie Morrison. Julie commented: “I participated in ‘Mintlaw Mudder’ in Aberdeenshire on Saturday 5th of August with a team of ladies from Buchan Netball Club. It was an eight-mile run with 27 obstacles most of which were very muddy and very wet! I wanted to raise money for SUDEP Action, in memory of my sister who passed away two years ago. It was a tough eight miles but lots of fun and giggles along the way!” 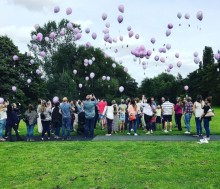 Michelle Charlton along with many friends and family held a balloon release, in memory of Lisa Charlton. Michelle told us: “It was such an unexpected shock when we lost Lisa from our lives, that it left so much unsaid. We decided to do a balloon release as a symbolic way of sending Lisa a message with everything we wish we could say to her. We used this as an opportunity to raise awareness and funds in Lisa's memory for SUDEP Action.”

Jo Rouse along with others raised funds in memory of her cousin, Rowena. Jo informed us: “On July 16th, my family and I set out to walk a 26-mile route along the canal from Whitchurch to Trevor Basin, in memory of my beautiful cousin, Rowena, who we sadly lost last year. We wanted to raise money and awareness for SUDEP Action and it was wonderful all being together to remember Rowena. As we are quite a large family group, including many young children, this meant those that wanted to take part but wouldn’t make the 26 miles also came along and got involved along the route. Rowena’s daughter, Emily, needs a special mention too as we worked out she walked almost 10 miles, quite something for a 7 year old. As a family we plan on carrying on our challenge tradition in memory of our loved ones so watch this space for more Trevor family events!”

Thank you and well done to all our August fundraisers.

We are always seeking new fundraisers, so if you have been inspired by anything that you have read get in touch! You can call Katie on 01235 772850 or email [email protected].